While not the most exciting element of a garden offices design. When reading specifications, or visiting show buildings, you need to pay particular consideration to the floor construction. There's nothing worse in a timber garden building than a 'springy' floor! How can you avoid this we hear you ask, well you need to ask your supplier how close together the joists are. A good quality floor will have the joists close together - between 400mm and 500mm apart; some cheaper garden offices space the joists further apart to save on materials!

As well as having the joists at narrow spacings. A perimeter framework will strengthen the floor frame. It seems obvious, but we have seen some garden office designs with open-ended joists, which without the strength of the perimeter framework are liable to twist - not good for creating a level floor!

Finally, a good garden office floor is strengthened with the addition of a structural floor deck. A layer of structural board laid over and fixed into the joists. This floor deck is also beneficial in forming a firm basis for the final floor covering, whether that's laminate or carpet.

If you get the opportunity to visit a garden office before you buy, take a small jump up, and see how much 'bounce' there is - you should expect the floor to be as firm as those upstairs in your house.

It's important that air can circulate under the floor of a garden office. Particularly with timber floors. If the floor area is not ventilated you are at risk of damp penetrating, and rot or fungal attack - all bad things.

Designers are well aware of these problems and design their floors so that air can freely flow. Some of the foundation systems used in garden office design create a suspended floor. Which lifts building up from the ground allowing air to circulate freely. When a concrete slab foundation system is used designers either lift the floor frame off the slab with bearers or create ventilation slots at both ends of the floor. 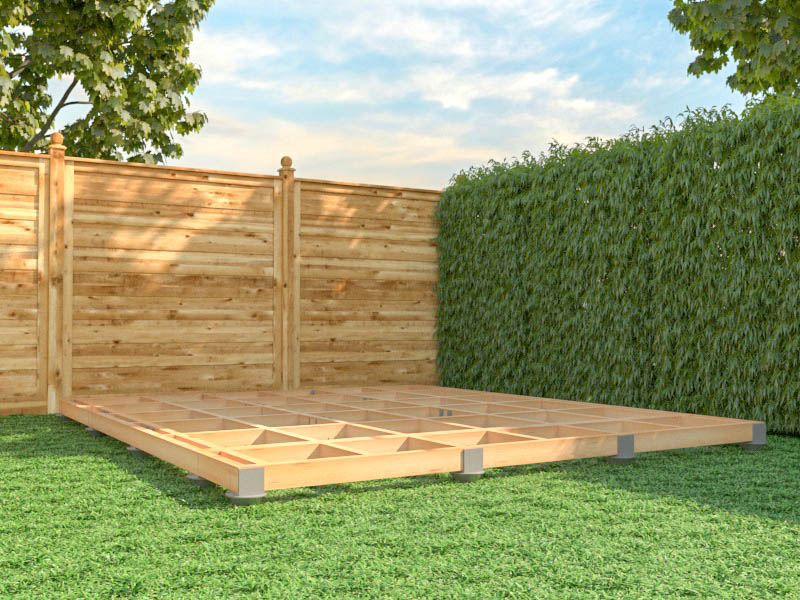 One of the reasons ground screw and plinth foundations are popular in garden office design is because they create a suspended floor. Allowing air to circulate freely under the floor frame.

A good floor is well insulated

A floor should be as well insulated as other elements of a garden offices structure, but in some designs, the floor insulation is compromised and in a few cases non-existent.

Like in other elements of the structure, there is a lot of choices when it comes to the type of insulation used in the floor construction. The most common is rigid sheet insulation's which have high thermal values but are relatively thin.

Many garden office suppliers try to meet, and in many cases exceed, the insulation values laid out for new houses. This is a good thing. The thermal performance is known as the u-value and is measured in W/m2k, its worth noting that the lower the value, the better the performing when comparing different structures.

It's not only the insulation that has a u-value, but all the layers in the floor make-up also have a value too, and your supplier will have used software to assess the value of the whole structure.

The type of foundation will affect the floor structure

Concrete slab foundations are popular, as they form a solid base that spreads the weight of the building evenly. In some designs of garden office, this concrete slab also forms the floor structure of the office. In this case, there is no timber subfloor, and the wall frames sit directly on the concrete slab - this is quite a useful trick when designing a garden office that's going to come in at less than 2.5m high, as the concrete slab is usually flush with ground level.

Timber floor on a concrete slab

Spaced pad and ground screw foundations have become very popular in garden office construction. They are spaced evenly beneath the floor, and a timber floor connects them together. Spreading the weight evenly across the foundation. This setup creates a suspended floor system, which allows good airflow underneath the floor. Keeping the structure of the floor away from the ground. The space between the joists provides valuable space for insulation.

SIP's are used for floors too

We've mentioned the word joists several times in this article, but not all garden office floors have traditional joists. This is because they are made from Structural Insulated Panels (SIP's), these are sandwiches of structural boards with a form insulation in-between. Because of the structural board, the load is distributed evenly without the need for joists. Although SIP's floors don't have joists every 400mm or so, they do normally have a timber perimeter framework connecting the panels together.

SIP's are highly thermally efficient because no timbers are breaking the run of insulation.

SIP's floor panels are used in conjunction with foundation systems that create a suspended floor. Such as ground screws and plinth foundations.

No home for rodents

While it is important to allow air to flow under the garden office. A void under the building can potentially form a habitat for rodents. Who are attracted to the warm, dry space. There are two schools of thought on how to deal with this issue. One is that if there is a gap all around the base of the building the rodents can run from one side to the other, without nesting. Other suppliers drop the wall cladding down beyond the floor level to close the gap around the floor. However, with this solution, you have to be careful not to block off the air flow!

It is this concern that leads many people to choose a concrete slab foundation, with the feeling that there is no void for the rodents to set up home.

Rodents are burrowers, and they could burrow under the office floor. Some suppliers have been known to bury wire mesh around the perimeter of the garden office. They fit this vertically and deeply with the theory that the rodent won't burrow through the wire.