When buying a garden office to run your business from, it is worth spending some time to consider if you might ever want to move it or sell it on. While most garden offices are modular, they are certainly not all portable. A portable garden office is one that has been designed and manufactured with the potential to dismantle it, move it and reassemble it with little damage to the fabric of the building and the structural integrity.

Garden office suppliers who have designed a portable office building will normally state this on their website. The other key way to identify if a portable garden office is to look and see if the interior is plastered. A garden office with plastered interior is not normally considered portable as it would take quite a lot of time to dismantle and would cause a significant amount of damage that would need repairing.

One supplier that offers portable garden office buildings is Booths Garden Studios. They recently relocated a garden office they built back in 2012 for a lady who uses it as the HQ for her nail bar business. Booths’ client was selling her house, and the new owners did not want to buy the building as part of the house sale. Having paid £10,000 for the office back in 2012, the client was not prepared to take the financial hit. Thankfully the QC range from Booths is fully portable, and they offer a relocation service for clients.

By moving the garden office to her new home, Booths’ client was able to continue running her nail business in an environment that works well. She spoke with the Booths team about dismantling and relocating the office. Booths’ price this service on the size of the building and the distance from their HQ and where it is being moved too. In this instance it cost £4,000, so while not an insignificant amount, a great saving compared to leaving the office at the old house or buying a new one.

The Booths team arrived on site first thing in the morning and started to dismantle the building. By 2.10pm the site was clear. Thanks to the foundation system that Booths’ use there is no ugly concrete slab and that area of the garden can easily be repurposed. 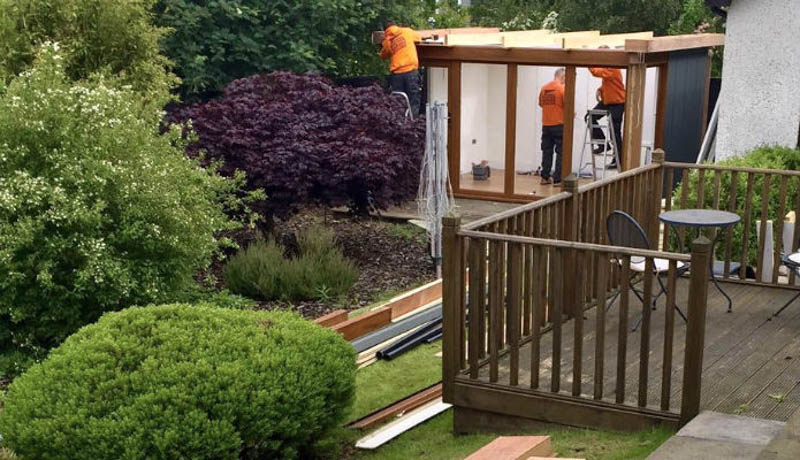 Having moved all the parts of the office to the new site, the Booths’ team installed the office in its new home the following day. As you can see the office looks like new, and the owner just had to move in her equipment and start work. Buy buying a portable garden office in the first place; this lady invested in a long term asset for her business – a wise choice!