The other day we spoke to a lady who having just spent a month in Western Australia wanted to recreate the feeling of the house she stayed in, in her new garden office.

The house she had stayed in was a traditional style with veranda at the front. She liked the way that the veranda offered a half way seating area between inside and outside.

Having decided that she needed a garden office so she can work from home, she saw it as an opportunity to create this inside / outside seating area in her own garden. She emailed us for tips on creating a garden office with veranda and some suggestions on suppliers who build them.

As she was looking for a traditional style garden office, reminiscent of the houses she had seen in Australia we suggested she take a look at the designs by Smart Garden Offices. If you look at this page you can see the options Smart have for creating a veranda on their garden offices. Look at the cantilevered roof and deck options which combined will create your veranda.

Tips for maximising space on a garden office veranda

Over the years we have built several garden offices with veranda and have found to keep them proportional with the scale of the building they tend to be 1 – 1.2 meters deep. This gives you enough space to place some garden chairs and move around, but it is by no means huge.

The traditional look is to add a balustrade to the veranda. This is often vertical spindles like you’d find on a staircase or something more custom like a X pattern with handrail. Whist these balustrades create a lovely look, do they actually bring anything to the usability of the veranda?

If your veranda is raised significantly off the ground then a balustrade is a must, it will protect people from falling from the veranda. However, if your veranda is at ground level they really don’t serve much purpose other than the aesthetic. 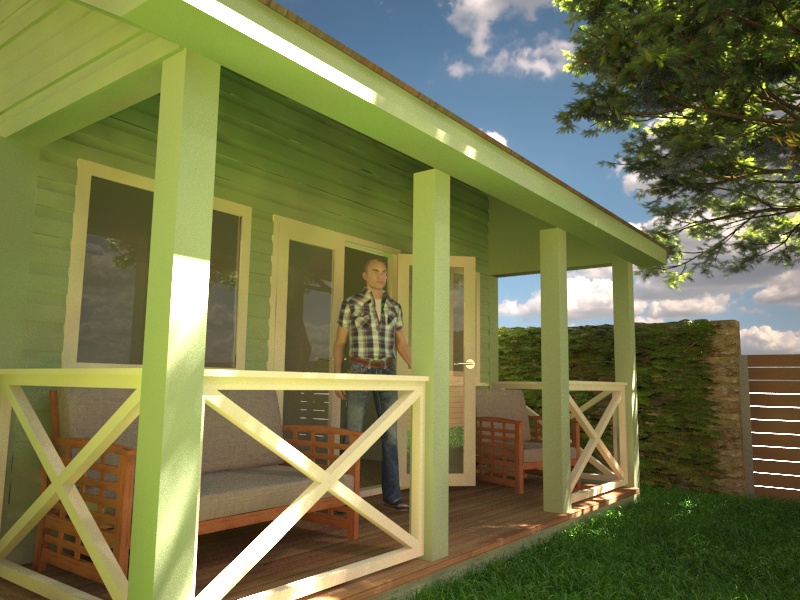 In our experience a balustrade can encase a veranda too much. Because of the height the rail needs to be when standing up, it can obscure your view when sitting down. A balustrade also contains the space and stops free flowing movement into the garden.

It seems that we are not alone in this realisation. Unless the veranda is significantly raised, most contemporary style verandas don’t feature a balustrade.

We modelled up the a garden office in these images to create a veranda area 1.2 meters deep. We used scale furniture to show the difference in space between a veranda with a balustrade, and one without it. You can see that there is not a lot of space between the chair and the balustrade. When you remove the railings there is much more connection with the garden. At the end of the day if you are choosing a garden office with veranda for its aesthetics – add a balustrade. If you want to create the most useable space possible and your veranda is not raised from the ground, think about not including one.